It was proclaimed with great fan fare that Ontario wind produced a record amount of power.

The IESO says that represents a capacity factor of 91 per cent and is more power than is produced by a large nuclear generator.

Impressive!  Sure makes the wind industry took fantastic doesn’t it.  Let’s replace all our nuke plants with wind turbines!  We get 91% efficiency!

Recall in the news about that enormous “weather bomb” that bombed out?  Yes, indeed it was a huge low pressure system that moved through, causing some damage on its route through Southern Ontario.

It was that storm that gave us the wind.  How many times a year do we get such storms?  One’s this size?  It was a rare event.  Likely be some time before this power production is broken in the future.  Lots more turbines need.  And, yes that is also why it was a record production.  This year is the largest number of turbines in operation.  So, as Homer says, Duh!

So let’s have a look at this “weather bomb” and how much output was produced. 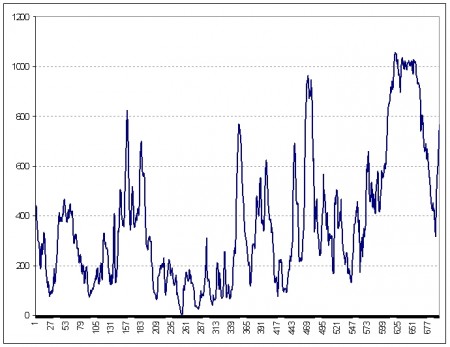 This is the total wind production for the month of Oct 2010 from the 1st to the 29th.  Definitely a windy month, and that “weather bomb” certainly produced a large spike.

This is the percent of name plate for the entire fleet for the month: 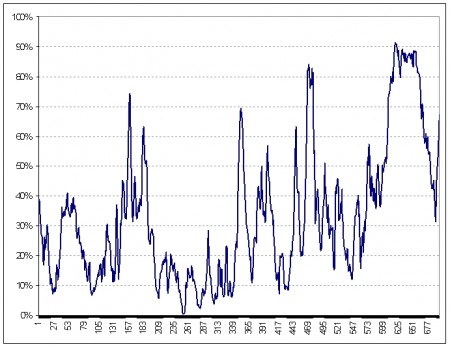 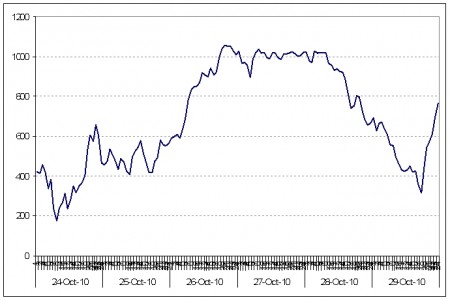 Interesting tidbit of information that left out of that article.  That 91% happened at 10pm when no one needed the extra power.  October is a month of low consumption to begin with. 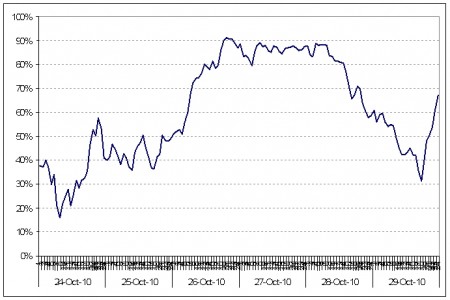 Here are the actual numbers:

Grand total of 3 hours at 91%, at the end of the day.  Trouble is, we didn’t need any of that power.  Since we were exporting power before the storm, excess wind from the storm wasn’t needed, especially in the middle of the night, and off it went to the US.

That will be proven so once export numbers are obtained.

What is interesting is the IESO making great fan fare about getting all this wind from a huge low pressure system that dumped 24 inches of snow in Winnipeg and millions in damage from tornadoes in the US.

That “weather bomb” period produced some 100,032MWh of power between the 24th and the 29th of October.  At $140/MWh for wind, that’s some $14 million dollars from your bills paid for those Ohio homes.

This entry was posted on Tuesday, November 2nd, 2010 at 12:39 am and is filed under Uncategorized. You can follow any responses to this entry through the RSS 2.0 feed. You can leave a response, or trackback from your own site.