How Many Wind Turbines?

In order to get that ability all year-long one then has to use the lowest Median Capacity Factor, which is the summer at 7%, but for easy calculations we will use the IESO’s 10% they used in this report (see footnote page 9).  That means, for 1.5mW turbines,  50% of the time each turbine producing less than 0.15mW, to produce that 4,050 megaWatts:

If one were to built the larger turbines, with the same Median Capacity Factor, it would be :

for 2 and 3mW turbines respectively. 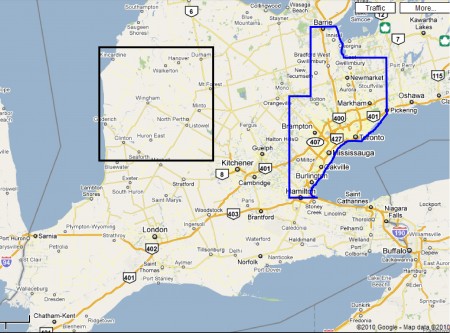 Or spread about the Golden Horseshoe like the blue area.    One wonders how the densest part of the province would like to have 27,000 turbines every 500 meters.  How many people in Rosedale would be willing to get rent on a 1.5mW wind turbine in their back yard?

But that is the number of turbines at today’s consumption.  What would the expected consumption be by 2030?

Is it possible to build them fast enough to meet that goal?

To meet the 1% GDP growth rate, the red line is how fast the construction of turbines would have to be.  For 3% growth the graph would have to look like this:

This chart shows the growth rate needed to build them that fast:

So for the price of all those turbines we can build two nuke plants producing  4160mW of power, almost 15% of our needs, 24/7, where as those turbines will produce less than 4160mW 50% of the time, 5% of the time they would produce nothing — $42 billion in turbines sitting idle.

This entry was posted on Saturday, September 18th, 2010 at 11:45 pm and is filed under Uncategorized. You can follow any responses to this entry through the RSS 2.0 feed. You can leave a response, or trackback from your own site.

8 Responses to How Many Wind Turbines?